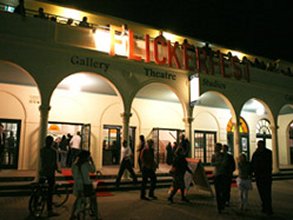 Flickerfest short film bureau commenced in March 2002 to distribute Australian short films of all types and genres to television stations [broadcast, cable, pay per view and satellite] internet sites, airlines and theatres throughout the world. Since 1998 Flickerfest has also distributed international short film content to these mediums in the territory of Australasia.

Flickerfest is dedicated to the promotion of Australian short films and the fostering of our film making talent through marketing our quality short film products to the broadest possible audience, making sure that they receive the maximum exposure possible.

As we only represent a small number of films we are able to give our film makers and our buyers great attention to their individual needs and to ensure that our catalogue is based on quality and excellence within the short film genre.