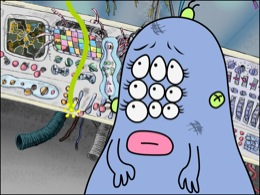 VALMAY THE VISITOR FROM BEEP BEEP BEEP BLEETLEBOX 967Valmay the Visitor from Planet Beep Beep Beep Bleetlebox 967 tells the story of Valmay Beepzup's first night on Earth. After winning the Miss Universe Beauty Pageant on her planet, Valmay is awarded the glory of being sent to Earth as an ambassador. With the assistance of her transmographer she is able to morph into a variety of human forms and so slip seamlessly amongst humans. Valmay is up for the party, however her plans go awry after her ship intercepts a fireworks display and she crash lands in the middle of Sydney's Mardi Gras Parade. With her transmographer wrecked, Valmay is forced out of her ship undisguised. And so she begins her first night on this strange planet a night that heralds more adventures than she bargained for.