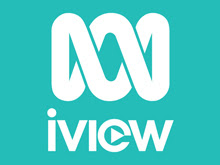 Showcasing FLiCKERFEST short films across the ABC iview network. We’re excited to be giving audiences around Australia the opportunity to view amazing short films from across the Festival.

Find us on ABC iview from November!