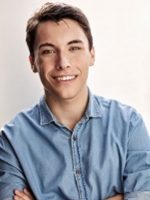 What are you working on now?
Currently, I’m working on Spielberg’s Masters of the Air, in the UK with Apple Studios.

Why do you think FlickerUp plays an important role for young filmmakers?
In filmmaking, it’s incredibly important to be able to set yourself goals, see what others around you are making as well as see your own work in front of an audience. FlickerUp presents an incredible opportunity to pursue these.

What advice would you give a young filmmaker on making a film for FlickerUp and entering?
Definitely give it a go – you’ll learn a lot, have fun, and be inspired by other people’s great films. 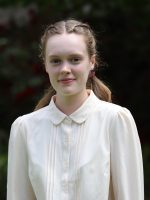 Why do you think SAE FlickerUp plays an important role for young filmmakers?
FlickerUp aids as an inspiration for young filmmakers. It provides the well-needed motivation for filmmakers to push their imaginations further and explore areas in the film industry that are left undiscovered. Personally, FlickerUp gave me confidence in my abilities in filmmaking which encouraged further exploration in film.

What advice would you give a young filmmaker in making a film for SAE FlickerUp?
I would encourage young filmmakers to believe in themselves. Trust their own dreams and visions for what their films could be. Try to not limit or restrict your ideas and imagination to what is deemed ‘trendy’ in that current moment. 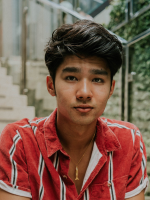 What have you been doing since you won the award for Best Editing in a High School Film – iRony?
I’ve continued to create a lot more films and grow as a filmmaker since then. I made a short animated film The Quiet, which got into Flickerfest and won Best Original Score, which was amazing to experience. I made another animation called Painting By Numbers which was also selected, and have made a few live action projects as well to keep a balance going. Right now I’m starting on my next animated short, with funding support from Screenwest.

Do you have a link to your current work or projects we can share?
Well look out for Bird Drone in 2022. Working on that now: Pixar-inspired Bird Drone takes flight

Why do you think SAE FlickerUp plays an important role for young filmmakers?
I think FlickerUp plays a very inspiring role for young filmmakers, and is very encouraging to be part of as an emerging creative. When I was selected for it, I was enthralled at the opportunity to be screened as part of Flickerfest, especially as an Academy Award and BAFTA Qualifying festival. For young filmmakers, to able to participate in something like that really shows us that we can pursue our dreams and passions, especially at a time when you’re trying to figure out what you should or can do in life and your career.

What advice would you give a young filmmaker in making a film and entering for SAE FlickerUp?
My biggest piece of advice would be to make the most of the resources available to you. If you have access to say, the Adobe suite through your school computers, then start watching tutorials (there’s so much that you can access online nowadays!) and begin learning how to use programs for editing/animation/motion graphics because you’ll find they will be useful to you not only for FlickerUp but for your future as a filmmaker. The earlier you start, the better. 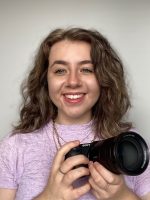 Gabrielle Gregoire:
What have you been doing since you won the award for Best Editing in a High School Short Film – La Torta?
Winning the Best Editing in a High School Short Film award and being a part of the FlickerUp competition was such a surreal moment, and ultimately confirmed to me that my passion is to create films to build bridges between people and cultures and make the world a more connected, loving and understanding place. I am very grateful for the FlickerUp experience.

I am currently completing a Bachelor of Arts (Film Production) at the University of Canberra, alongside undertaking a filming internship with the Indigenous Marathon Foundation.

Do you have a link to your current work or projects we can share?
‘Una Vita Felice’ (short-documentary): Directed by myself (Gabrielle Grégoire and Niamh Murphy)
Current showreel: here

Why do you think FlickerUp plays an important role for young filmmakers?
My goodness, where do I start?! I feel like this because FlickerUp is overwhelmingly important to young filmmakers and the industry as a whole, and I’m worried that I’m not able to adequately express its importance.

For young filmmakers, FlickerUp provides the opportunity to showcase our films, our stories and ourselves as creatives. It also provides inspiration and a sense of connection to the whole film industry in Australia.

It also gives the wider Australian audience a platform to experience what’s in the hearts and minds of young Australians. FlickerUp offers a wonderful bridge of understanding and communication between generations and cultures in Australia.

It was such a joy to have the screening of my film La Torta in Bondi Beach, Sydney. A film that I made alongside two other young Australian filmmakers from Brisbane, Olivia Lawson and Miljana Miljevic. La Torta was created in Italy, on the land of my ancestors.

What advice would you give a young filmmaker in making a film for FlickerUp?
The best and only place to start when creating a film is from the heart. Your creations, visuals, sounds, sets, edits must come from a personal place and have a connection to you.

It is also important to work with people who are supportive, like-minded and simply make the whole production experience fun. Seek out and help create positive and respectful environments when producing your film, allowing yourself and others to learn from one another, to grow as creative human beings, and ultimately allow for the best possible version of your film to be created for the world.

And finally, experiment! Don’t be afraid of your imagination and your weird ideas when creating your film. They are unique, and are a gift to humanity and the world.
. 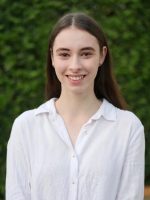 Olivia Lawson:
What have you been doing since you won the award for Best Editing in a Youth Short Film? – La Torta?
I’ve recently graduated film school and am now working full time as an editor for a couple of video agencies. I’m also in the early stages of working on a script for a short film which I’m excited for.

Why do you think FlickerUp plays an important role for young filmmakers?
I think it’s a great opportunity for young filmmakers to see their film on a big screen while also taking the time to see what others are doing, in FlickerUp and also Flickerfest. It’s also a really good thing to hear feedback on your project (and others) so that you’re never stagnant and always improving!

What advice would you give a young filmmaker in making a film for FlickerUp?
Editing is extremely important, a really large part of the film can really be shaped in the edit suite, don’t be afraid to change things from the original plan.

And honestly, just have fun. Take inspiration from filmmakers and films you admire but don’t lose yourself and your vision. La Torta was a bit of a nonsensical mess of a film, but it was a really fun and creative mess to make! 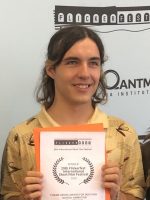 What have you been doing since you won the award for Let Me In, Let Me In and Anansi for Best High School Animation?
I completed an Advanced Diploma in Concept Art at The Enmore Design Centre in Newtown. I now work full time for Animal Logic, who make animated feature films like the Lego movies and Peter Rabbit.

Why do you think SAE FlickerUp plays an important role for young filmmakers?
I think FlickerUp is a fantastic festival for school students from across Australia – there are so few festivals we can enter films such as those we completed for the HSC or even from primary school filmmaking groups. FlickerUp is run so well, has a great audience and has the credibility of being run by Flickerfest. I found it hugely rewarding to enter and it was very motivating to be recognised with an award. I was able to mention the awards in my CV and it was helpful for getting work in the industry.

What advice would you give a young filmmaker on making a film for SAE FlickerUp and entering?
Definitely enter your films – it is an easy application process, and it is fantastic to see and learn from other people’s films. It is also really rewarding to see your film on the big screen in a great venue!