THANKS FOR HAVING US MELBOURNE AND NEWCASTLE, SEE YOU SOON BRISBANE!!

The Flickerfest Tour to Melbourne and Newcastle was a massive success with large crowds at each location.

Melbourne-ites came out in force to support their local filmmaking brethren for our Best Of Melbourne Shorts screening and born and raised Novocastrians Jake Nielsen and Matthew Predny from our Best Australian Short Film award winning short On Hold were awarded a standing ovation following their Newcastle screening!

This weekend we head north to Brisbane with two great nights of shorts on offer at the Palace Centro Cinemas!

Friday night join us for the Best Of Australian Shorts screening including fabulous shorts from local filmmakers!  Maddie & Marc from Brissie local Daniel Flynn Anderson is an insight into the joys of getting married and thriller The Baby Whisperer, from fellow local Director Sean Gilligan, will keep you on the edge of your seat!!!

Thanks to our generous sponsors there will be an after party following the screening giving you the chance to come and rub shoulders with the rising stars of Australian short film!

On Saturday night come and catch the Best Of International Shorts with highlights such as the moving and insightful Academy Award nominated All Of Us (Watu Wote) from Germany based on a true story that sees Christian and Muslim bus passengers in Kenya join forces during an attack by extremist group the Al Shabaab and the timely and culturally relevant Wren Boys from Ireland that shines a spotlight on the theme of Gay marriage when a catholic priest from Cork drives his nephew to prison the day after Christmas.

We are also excited to screen After The Smoke from local Brisbane director Nick Waterman as part of this programme. Co-written by Waterman and singer/songwriter Bertie Blackman, it was filmed on location in Mt Isa and was awarded a special mention by the jury at the Berlin International Film Festival in 2017!

This week we are also stopping off at Crescent Head, Kempsey, Toowoomba, Noosa, South West Rocks and Hopetoun, WA.  We are bound to be coming soon to a town near you, check out our tour page for more details!!  See you sometime soon in a town near you!

CONGRATULATIONS TO ‘POLES APART’ ON THEIR BAFTA WIN!!

Huge congratulations to the team behind the delightful short Poles Apart on their BAFTA win!

Poles Apart is a delightful stop motion film about a hungry polar bear, Nanuk, voiced by Helena Bonham Carter, who has to decide if a lost and naive Canadian grizzly is her friend or her dinner!  It was a massive hit when it screened at FLiCKERFEST in Bondi last month as part of our FlickerKids programme.

A massive congratulations to Director Paloma Baeza and Producer Ser En Low and all the Poles Apart team from all of us here at Flickerfest! 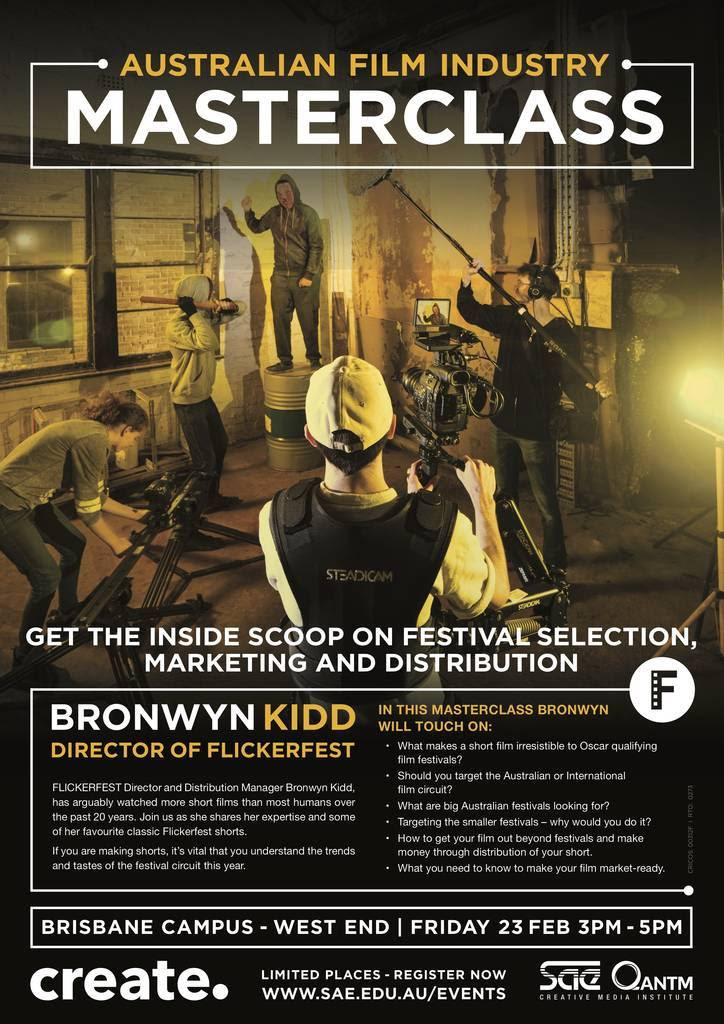 Get the inside scoop on Festival Selection, Marketing and Distribution with Flickerfest Festival Director Bronwyn Kidd at SAE Brisbane this Friday!

Bronwyn has arguably watched more short films than most humans over the past 20 years. Join in as she shares her expertise and some of her favourite classic Flickerfest shorts.

If you are making shorts, it’s vital that you understand the trends and tastes of the festival circuit.  Come and learn how to make your short film Festival and market ready!