FLiCKERFEST COMING TO A TOWN NEAR YOU! 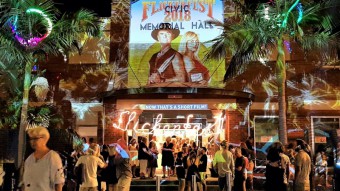 After a hugely successful ten days of celebrating the very best of short film at Flickerfest’s 30th Birthday celebrations in our bespoke Festival Garden and Bar.

Flickerfest is now hitting the road over the next 8 months sharing the short film love all across the country!

The Flickerfest Tour will be bringing a fabulous selection of hot shorts fresh from the Bondi festival to around 50 venues across Australia!!

First stop from the 18th to the 20th February will be The Civic Hall in Mullumbimby where Flickerfest will be presenting four incredible programmes – Best of International Shorts, Best of Australian Shorts featuring the stunning This River, filmed locally in Lismore and directed by Naomi Fryer who grew up there, ‘This River’ was awarded the Spectrum Films award for Best Direction in an Australian Short Film at #flickerfest2021, the Short Laughs Comedy programme and the Byron All Shorts competition – showcasing the talents of local filmmakers from across the region, all vying for some fabulous awards.

That same weekend 19th and 20th February  Flickerfest will be stopping off at the Jetty Theatre in Coffs Harbour with both the Best of Australian Shorts featuring The Immortal from writer/director Carl Firth whose family lives locally and the Best of International Shorts programme.

We will also be stopping off at The Civic Theatre in Gunnedah on Sunday 21st February with two afternoon programmes the Short Laughs Comedy and Best of Australian Shorts which includes This Town Ain’t Big Enough For The Both Of Us by D.C Fairhurst who took out the award for Best Editing in an Australian Short Film at #flickerfest2021.

Check out the Tour page of our website to find out when the Flickerfest Tour is stopping off in a town near you.

A SHOUT OUT TO THE #FLICKERFEST2021 PARTNERS

Flickerfest would not be possible without the incredible support of our generous partners who helped us in making #flickerfest2021 the fabulous event that it was!  A huge thanks to our Government Partners Screen Australia, Waverley Council, Screen NSW; Major Partners SBS On Demand and SAE Institute Australia; supporting partners
MINI Garage Sydney and Time Out Sydney; our Award Partners SAE Institute Australia, Avid, Panasonic  #YoramGross, John Barry Sales, Spectrum Films and Azure Productions.

And we couldn’t have done it without the delicious food and drinks from Four Pillars Gin, Gage Roads Brew Co, Rosnay Organic Wines, Parker’s Organic Juices, Perrier and Fever-Tree.

FREE FILM MASTERCLASS: HOW TO BREAK INTO THE SHORT FILM INDUSTRY

Are you an emerging filmmaker looking to break into the short film industry? SAE Creative Media Institute are partnering with Flickerfest to host a series of masterclasses across their campuses in Australia: Brisbane, Byron, Sydney, Melbourne and Perth.

Flickerfest director and distribution manager, Bronwyn Kidd will share her expertise and some of her favourtite classic Flickerfest shorts with aspiring and established filmmakers alike. Also joining Bronwyn will be prominent industry expert guest speakers, who’ll share their knowledge and give advice on how to get your big break into the world of short films.

To find out more about this exclusive masterclass and to secure your spot, head to the SAE website for more details: www.sae.edu.au/events